When Rondell Washington’s sister-in-law Stephanie became ill with COVID-19, HPH saved her life. Ron, an Emergency Department Nurse at the hospital, was deep in the COVID-19 pandemic when Stephanie got sick. “When COVID-19 hit, it was like we went to war”, he said. “At first, we were losing the battle—I had never seen so many deaths. When Stephanie got sick though, it hit even closer to home.”

Stephanie was brought to the Emergency Department by ambulance. She was quickly moved to intensive care and intubated because she could not breathe. “One nurse described the vent as trying to blow air through concrete”, Ron recalled. “With my faith, I believed Stephanie would get better, but the outcome wasn’t always clear.”

Fortunately, after nine days, Stephanie improved enough to be removed from the ventilator. Her subsequent recovery was slow—she spent 91 days in the hospital and rehab facilities before being cleared to continue getting better at home.

Ron is thankful to the entire medical team for their excellent and compassionate medical care. Among the many nurses and doctors involved, he credits Katarzyna (Kasia) Czyketia, one of Stephanie’s ICU nurses, who made sure Ron and his family were updated regularly on Stephanie’s condition, and Dr. Alkeem Savage, who kept Stephanie as comfortable as possible so that her body could recover without emotional trauma.

“The team of doctors and nurses treated Stephanie like they would treat their own family”, he said. “We are all grateful.”

And, Ron notes, HPH is now winning the war against COVID-19. “I think of our hospital as David going up against Goliath. With our wits, persistence, and compassion, we will prevail.” 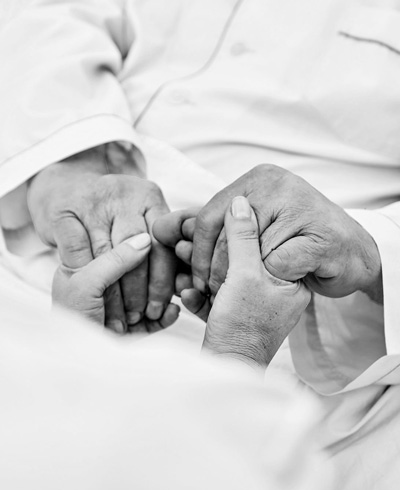